MET Hungary Zrt.'s (formerly MOL Energiakereskedő Kft) deed of foundation was ratified on 26 February 2007. On the basis of the natural gas trading licence issued by the Hungarian Energy Office, the Company Court registered the trading company, which was then 100% MOL Nyrt's ownership on 24 April 2007. MET Hungary began its active operation on 1 June 2007, with its main activities being the wholesale and retail trading of natural gas.

On 18 December 2009, Normeston Ltd gained a 50% share in the company. The Company's, and its laterformed Austrian, Romanian, Slovak, Croatian and Swiss subsidiaries' shared aim, in accordance with their mission, was to enter the international natural gas markets.

In 2013, the Group opened up towards a new branch of business, the electricity market, thereby expanding its range of products.

In 2020, Keppel Infrastructure, the wholly owned subsidiary of Singapore-listed Keppel Corporation completes its acquisition of a 20% stake in MET Group – the two companies enter into a strategic partnership. MET is owned 80% by its employees.

MET Hungary Zrt'.s aim is to provide flexible, reliable and calculable services for its business partners, and the on-going improvement of these services through innovative tools.

MET Hungary Zrt. is committed to the continuous development of the company and the training of its employees in order to improve its performance. Both the individual and the team work of our recognised and qualified employees is determined by our mutual strategic goals. 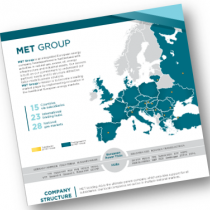